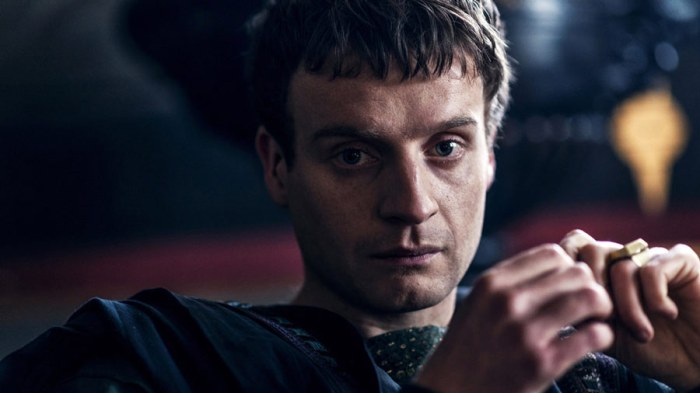 NBC.com described Andrew Gower‘s character in their biblical drama A.D. – The Bible Continues as “debauched and dangerous” but who was the youth that ascended to become the most powerful man in the known world, the third Roman emperor, really?

Caligula was born Gaius Julius Caesar Augustus Germanicus on 31 August 12 in Antium (near Rome) as the son of popular Roman general Germanicus and his wife Agrippina, who was a granddaughter of the famous Emporer Augustus.

Caligula’s mother followed her husband on all of his campaigns which meant that Caligula grew up in military camps. His father’s soldiers even gave him his nickname “Caligula” which is a diminutive form of the Latin word “caliga”, a Roman soldier’s traditional footwear.

When Caligula was 2 years old, Augustus died and Caligula’s great-uncle and adoptive grandfather Tiberius succeeded him. Five years later, Caligula’s father died and his mother returned to Rome with her six children where she was soon caught up in a deadly feud with the emperor which left Caligula the sole male survivor of the family and heir to his uncle’s throne.

Outwardly unfazed by the intrigues that had killed most of his family, he joined Tiberius on the island of Capri where he lived for the following six years. According to historians, Caligula was an excellent natural actor and, recognizing danger, hid all his resentment towards Tiberius.

Tiberius died on 16 March 37 aged 77 in Misenum (near Naples). There are various rumours surrounding the circumstances of death, ranging from natural causes to Caligula killing his uncle to revenge the death of his family. Caligula succeeded him as Roman emperor at the age of only 25.

At least in the first 6 months of his reign, Caligula is described as a moderate and noble emperor, who was very popular with the people, beloved and admired by everyone in “all the world, from the rising to the setting sun.” He generously granted financial bonuses to the military and organized lavish spectacles and gladiatorial games for the public.

In October 37, Caligula became seriously ill – or was poisoned. He soon recovered from his illness physically but it seems to have changed him mentally completely. He had several members of his family executed and forced the Praetorian prefect Macro to commit suicide. Caligula’s overspending had also exhausted the state’s treasury within a very short time which led him to take some desperate measures in order to find new funding.

He started a series of public and political reforms, he allowed new members into the equestrian and senatorial orders and restored the practice of democratic elections. All these reforms were eyed suspiciously by the established members of the Roman senate who feared for their wealth, influence and power, and eventually caused a break between the young Emperor and the senate.

Caligula re-established Tiberius’ “treason trials” and had several senators degraded or put to death. Resentment against him among the nobles of Rome grew and conspiracies bloomed. The situation escalated when Caligula announced that he wanted to leave Rome permanently and move to Alexandria in Egypt where he hoped to be worshipped as a god. Afraid to lose their power and influence over the Emperor, members of the senate and the Praetorian Guard led by officer Cassius Chaerea cornered Caligula on 22 January 41 and stabbed him to death parallelling the assassination of the first (Gaius) Julius Caesar, Caligula’s namesake.

All surviving contemporary sources about Caligula’s life (except one) describe him as an insane emperor who was self-absorbed, angry, killed on a whim, and indulged in too much spending and sex. He is accused of sleeping with other men’s wives and bragging about it, killing for mere amusement, deliberately wasting money, causing starvation, and wanting a statue of himself in the Temple of Jerusalem for his worship.

Once, at some games at which he was presiding, he was said to have ordered his guards to throw an entire section of the audience into the arena during the intermission to be eaten by the wild beasts because there were no prisoners to be used and he was bored.

Later historians added stories of Caligula’s insanity and accused him of incest with his three sisters and say he also prostituted them to other men and turning the palace into a brothel. He sent his troops on illogical military exercises and most famously planned to give his favourite horse Incitatus the title of a consul, the highest political rank.

All original sources, written and otherwise, about him were systematically destroyed after his death. Much of what we know today about Caligula’s reign comes from the accounts of Roman historians Suetonius and Cassius Dio, who wrote their histories on Caligula many decades after his death and mostly based on hearsay. The validity of these accounts is debatable. In Roman political culture, insanity and sexual perversity were often presented hand-in-hand with poor government.

Caligula is the prototype of the insane tyrant but does he really deserve his bad reputation? Modern historians actually see Caligula as the victim of a smear campaign. Probably not everything that was written about him can be dismissed as pure fiction but it is possible that stories about him became more and more exaggerated as centuries passed on. Some of it might be altered deliberately by members of the Senate and Roman nobility as they saw their power restricted more and more by Caligula who was only the third Roman emperor.

Ancient sources also report that Caligula suffered from the “falling sickness” (epilepsy) and insomnia while modern historians think he might have had hyperthyroidism or meningitis. Based on scientific reconstructions of his official painted busts, Caligula had brown hair, brown eyes, and fair skin.