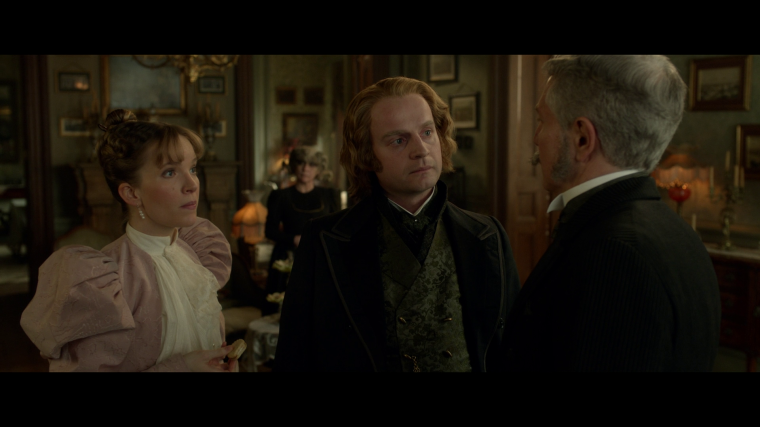 While Philo (Orlando Bloom) is investigating the murder of former famous fae singer Aisling Querelle (Erika Stárková), the Spurnroses meet with their solicitor Mr Wigsby (Roy McCrerey) to try and find out how to get rid of their unwanted neighbour, the Puck Mr Agreus (David Gyasi). Learning there is nothing they can do legally, they decide to simply ignore him which proves to be more complicated than it sounds.

Frustrated about the situation, a drunk Ezra (Andrew Gower) “offers” Vignette (Cara Delevingne) an alternative way to reimburse him for the loss of his family’s fortune. When she refuses his advances, he tries to rape her but she is able to flee. Ezra accuses her of stealing and files a police report against her. Philo overhears this at the constabulary and buys Vignette’s contract from the Spurnroses.

Vignette finds refuge at The Tetterby Hotel, the fae brothel on Carnival Row, where her friend Tourmaline Larou (Karla Crome) works, who introduces Vignette to a rebel fae group called “The Black Raven” led by the fierce Dahlia (Chloe Pirrie). Running out of options, Vignette decides to join them despite the danger she is putting herself in.

The Chancellor’s son Jonah (Arty Froushan) is still missing after being kidnapped from Tourmaline’s room at The Tetterby Hotel. Desperate, his mother Piety suggests to seek the help of the fae witch, the haruspex Aioffe (Alice Krige) who deduces that Jonah was kidnapped by the Breakspear’s rival, Ritter Longerbane (Ronan Vibert).