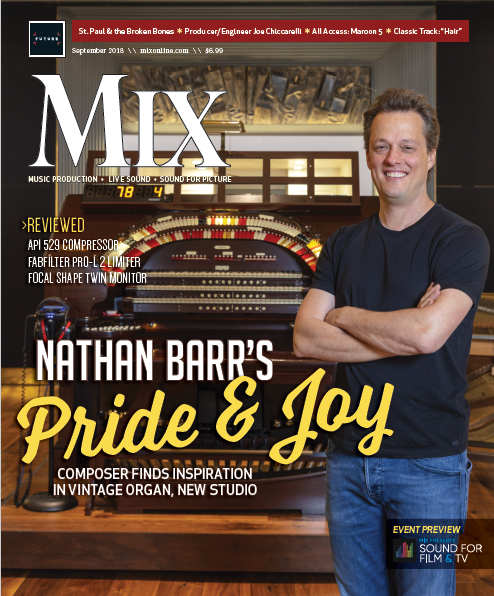 In their September issue Mix Magazine talked with award winning composer Nathan Barr (True Blood) about his “Stunning New Studio, a Rare Wurlitzer Organ, and the Tones of a Human Femur”. Apparently both of these unusual “instruments” will play a part in composing the soundtrack for his current project Carnival Row:

For Carnival Row, Barr’s left-of-center sound palette incorporates some of his more esoteric instruments, such as a glass armonica (designed by Benjamin Franklin in 1761) that he occasionally plays with steel drum mallets, a nyckelharpa, and the bottom pedals of the Wurlitzer Theater organ, which are capable of producing a low, rumbling growl. But the most unusual instrument Barr chose is the kanglang.

“It’s a human femur from Tibet that’s probably 150 to 200 years old. Some monks when they die have portions of their bones turned into trinkets or instruments,” Barr explains. “The kanglang produces a strange, incredibly unique sound that’s somewhere between music and sound design.”

I had a vision when I moved out here 20 years ago of a big, beautiful room to record music in and sort of having different stations, where I could bounce around from keyboards to strings to whatever, and that’s kind of what it’s become when we’re not recording orchestra. I’m doing a show right now at Amazon called Carnival Row, and I’m using the Wurlitzer quite a bit in that—sort of almost as a synth. So we have the organ on and in place and mic’d most of the time. So I can just sit down, and then we’ve got a picture up on the stage as well.

This sounds really intriguing and we can’t wait to hear the finished result – along with seeing Andrew Gower as Ezra Spurnrose in early 2019!